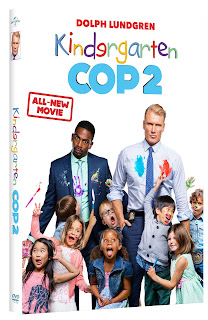 
When I heard Kindergarten Cop 2 was being made, my first thought was WHY? My second thought was, oh brother, this WON'T be good. Well, I just finished watching the review copy given to us and you know what? I'm not ashamed to admit when I'm wrong. BUT...this is NOT one of those times. Although not a completely TERRIBLE movie, I wouldn't say that Kindergarten Cop 2 is a must see, or even easily recommended, movie to see.

Instead of creating an entirely new scenario for this go around, they opted to regurgitate many of the gags and plots from the original Kindergarten Cop, but with much less success. 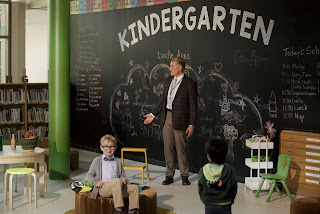 This time around, instead of a local cop, the 'hero' is Zack Reed (played by veteran action star Dolph Lundgren), a gruff, hard as nails, VERY LARGE FBI agent who'd rather break the rules than play by them (sound familiar?). Agent Reed is assigned to recover very sensitive data stolen by some very bad men...duh duh duh! So, of course, where else would this sensitive data be hidden? Why, on a flash drive in a prestigious private school! And, Agent Reed must go undercover as a...yeah, you guessed it, a kindergarten teacher! That's all you're getting in the way of plot details, cuz, well, you know we don't spoil movies. Even stinkers. Anyway... 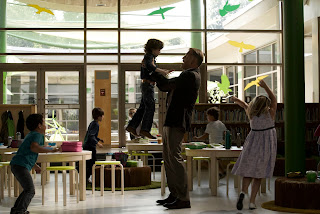 Ok, first off, the original Kindergarten Cop was released in 1990 and was a great, fun, and funny film. Why anyone felt the need to make a sequel nearly 30 years later is anyones guess. Well, ok, they probably ran out of original ideas and thought playing off a hit film from 30 years ago was a good idea. Which is why it went straight to DVD, right? Anywho, I have a pet peeve when it comes to weapons fire in movies and TV shows. When a bullet hits something, it typically leaves a hole, or if fired at glass...it BREAKS the glass. But in one scene, the bad guys are shooting up the Seattle FBI offer, Reed and his partner (played rather absurdly by Bill Bellamy), use a candy vending machine as cover as they push it out into a hallway, and overtake the bad guys. And we see the bullets BOUNCING OFF THE GLASS? There's also a plethora of continuity issues: for some odd reason, Dolph's hair keeps parting on the left, then on the right, then back on the left throughout the first part of the movie; Dolph's tie changes a few times within the same scenes; in one scene, the kindergarten kids smear blue paint all over Dolph's shirt. Yet, when he goes home for the day, there is very little blue paint and a lot of yellow. And the FBI director (played by Danny Wattley) is a joke. Not sure why, but they chose to portray him as a bit of a overly scripted cliche, shouting inches from Agent Reeds face, constantly acting as if he was on some sort of drug. I liked him less than most of the bad guys in the movie. All in all, most of the supporting actors, including the children, were annoying. 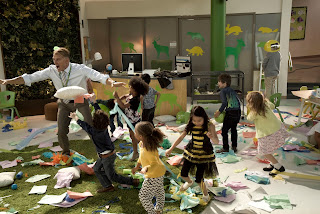 I really wanted to like Kindergarten Cop 2. I loved the original, and though I had much, much lower expectations for a sequel, this movie sank WAY below what I'd hoped for. I like Dolph Lundgren. He's no Oscar winning actor by any stretch, but he's earned his place in the B action movie genre. However, this spectacle may have damaged his rep!

**We were given a copy of Kindergarten Cop 2 on DVD in exchange for an honest review.

Posted by Storyteller Audio Productions at 10:24 AM No comments:

Joyce and I, as so many of you know, are HUGE Disney fans. We love the Resorts, the movies, the merchandise, and of course, Walt Disney. For us, he epitomized fun and success. He stared adversity in the eyes and succeeded, when most said he'd fail. He did things his way, despite the naysayers, and when his way didn't work, he'd reinvent and go again. These are the things that catapulted Walt Disney to the level of LEGEND. And you can see this all for yourself. Well, sort of. In the new musical play, When You Wish: The Story of Walt Disney (playing at the Phoenix Theater May 18 - June 12, 2016, you can witness for yourself, Walt's trials, tribulations, triumphs and victories, all set to some very fun, toe-tapping musical numbers! 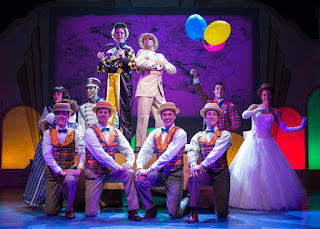 When You Wish is the story of Walt Disney, from his early days as a young animator at his company Laugh O Gram Studios, all the way to the opening of Walt's beloved Disneyland.

The show is presented in a very appealing way. It's narrated by Walt's brother and business partner Roy Disney. It all starts with Walt trying to sell Roy on the concept of Disneyland, then, we flash back to 1908 with a six year old Walt drawing his cartoons on the family home, barn, and toilet paper! 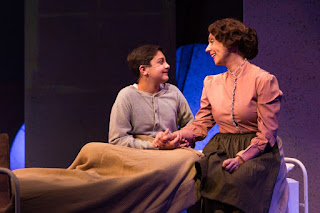 The show progresses through the major milestones throughout Walt's life, such as Laugh O Gram Studios, Oswald the Lucky Rabbit, Walt's famous move to California, Disney Brothers Studios, meeting and marrying his soul mate Lillian, the creation of Mickey Mouse and ultimately the opening of Disneyland (with Walt reciting the now famous "To All Who Come To This Happy Place, Welcome..." speech).

Eighteen original (and very well done) musical numbers and dances, help to present Walt's story in a very fun and enjoyable way. I don't usually enjoy musicals, but When You Wish is just one of those you can't help but love!

Veteran Broadway actor Joey Sorge plays Walt, and although at first I thought "hey, he doesn't look like Walt at all!", he quickly won me (and Joyce) over with his command of the role. Joey's performance makes When You Wish so special. Sydney Marie Hawes portrayed Lillian and Andy Umberger (another veteran of Broadway) portrays Roy Disney. I must add that Andy Umberger does a wonderful job as Roy, and he and Joey are very convincing. In fact, we quickly got lost in their performance and the ease in which they played off of one another. The total cast consists of 20 actors/actresses and they all make this show a pleasure to watch.

When You Wish was created by Dean McClure, who wrote the play as well as all the musical numbers. Mr. McClure's journey to bring When You Wish to life is quite interesting. Born out of a desire to see Walt's story on Broadway, Dean conducted intensive research and began writing his play.

When You Wish is directed by Larry Raben, the musical director is Alan Ruch and the choreographer is Lee Martino. The show is broken into two acts, with act one running one hours 20 minutes, and act two running one hour. Although coming in at two hours 20 minutes, it sure didn't seem like it! Time VERY well spent. When You Wish: The Story of Walt Disney is playing at the Phoenix Theater (in Phoenix, Arizona) from May 18 - June 12, 2016, with multiple show times, including matinees. For tickets visit The Phoenix Theater.

All in all, When You Wish: The Story of Walt Disney is a fabulous musical, and in our opinion, a must see event. Well acted, well choreographed and well presented, we give this show 5 stars out of 5!

**Joyce and I were given tickets in exchange for an honest review.


Posted by Storyteller Audio Productions at 1:35 PM No comments: