The Chronicles of Duffy - Adoption Day!

On an unusually warm day in December, I was daydreaming about joining all the kids that were laughing, playing, and making memories at Paradise Bay. When this lady walked in the shop, picked me up and said how cute I was, a man called her and she put me down and walked out of the store. A few minutes later this man came in the store picked me up and we went for a walk, next thing I knew I was in total darkness and could not really breathe.
I was scared until I realized I had been adopted into a loving family that LOVED all things Disney. So my adventures began on this day....my newly adopted parents vowed to introduce me to all their pals and create memories that would last a lifetime.
I was first introduced to Tim and Frank and found that they were the reason Mom left the shop when she was looking at me. Tim and Frank were friends they met on a recent Disney trip and Dad knew Mom would want to see them. Then we dined at Ariel’s Grotto but I had to stay in the bag because Mom was a little over protective of me. After dinner, I was tired so I went back to the hotel room and slept for the night while Mom and Dad enjoyed the World of Color and the Parks.
We stayed in California for the next two days then we went home to Arizona. When I arrived at my new home I found there was a furry friend to greet me and she had 4 legs and was named Kate. 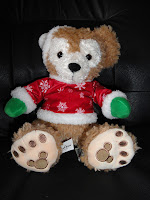 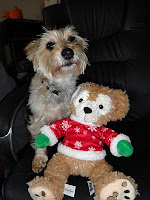 Posted by Storyteller Audio Productions at 11:00 AM No comments: