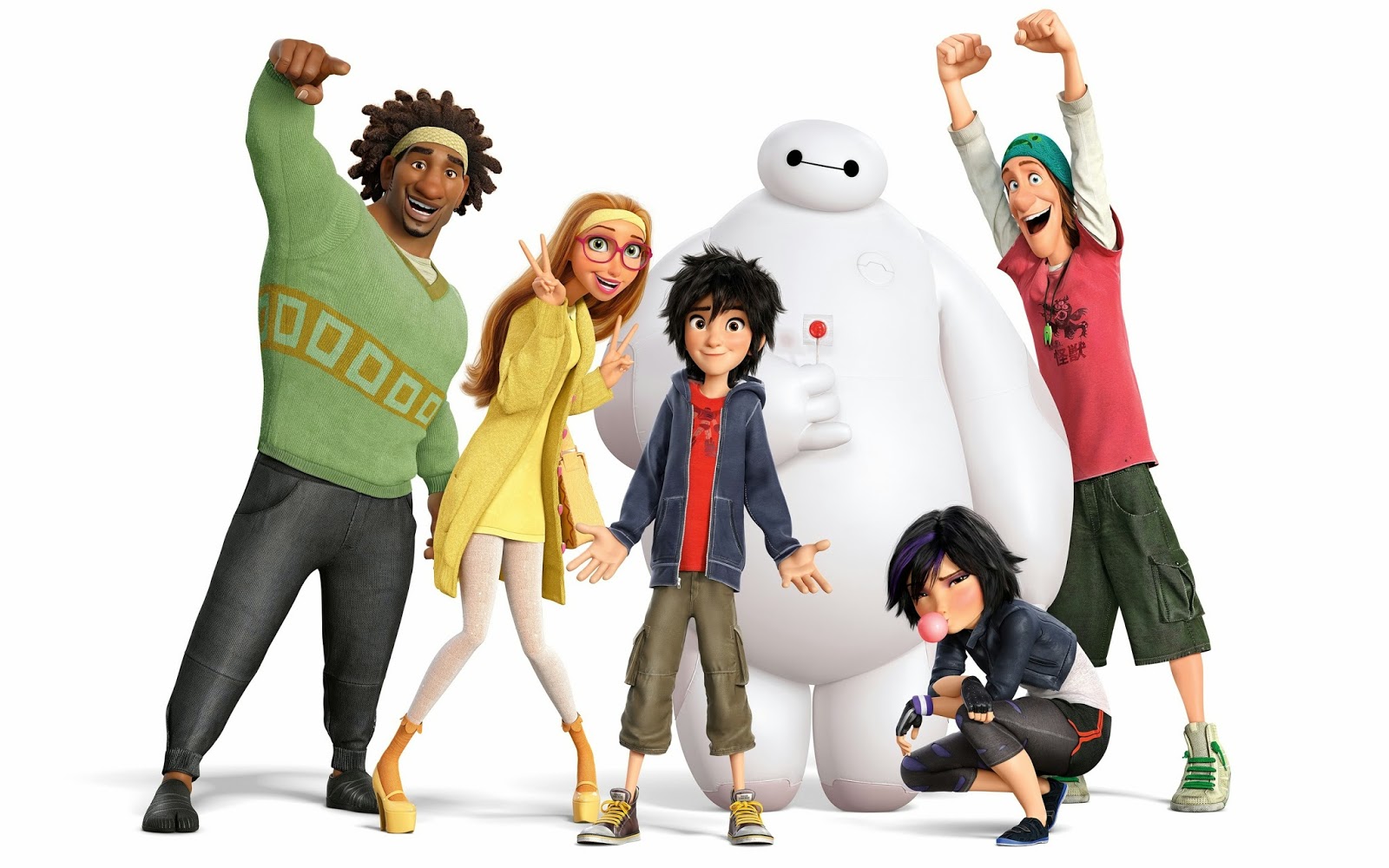 Just before Frozen was released in 2013, I visited a friend at Walt Disney Animation Studios. I asked him, “What film are you guys working on next that you can tell me without killing me?”

Being a huge Marvel fan, I immediately asked him with great excitement, “Which one?!?!”

“Oh, you probably don’t know this comic. It’s called ‘Big Hero 6,’” he replied, fully expecting me to be dumbfounded.  But, being the big Marvel fan I was, my eyes lit up and said, “Oh, my god! I totally know what you’re talking about!”

But, of course, after that, I was loaded with questions that he couldn’t answer. While I was familiar with the comic, it was an extremely obscure one. And, it was based on a Japanese super hero team with less conventional names such as Honey Lemon and Wasabi No Ginger. How would they pull this off? 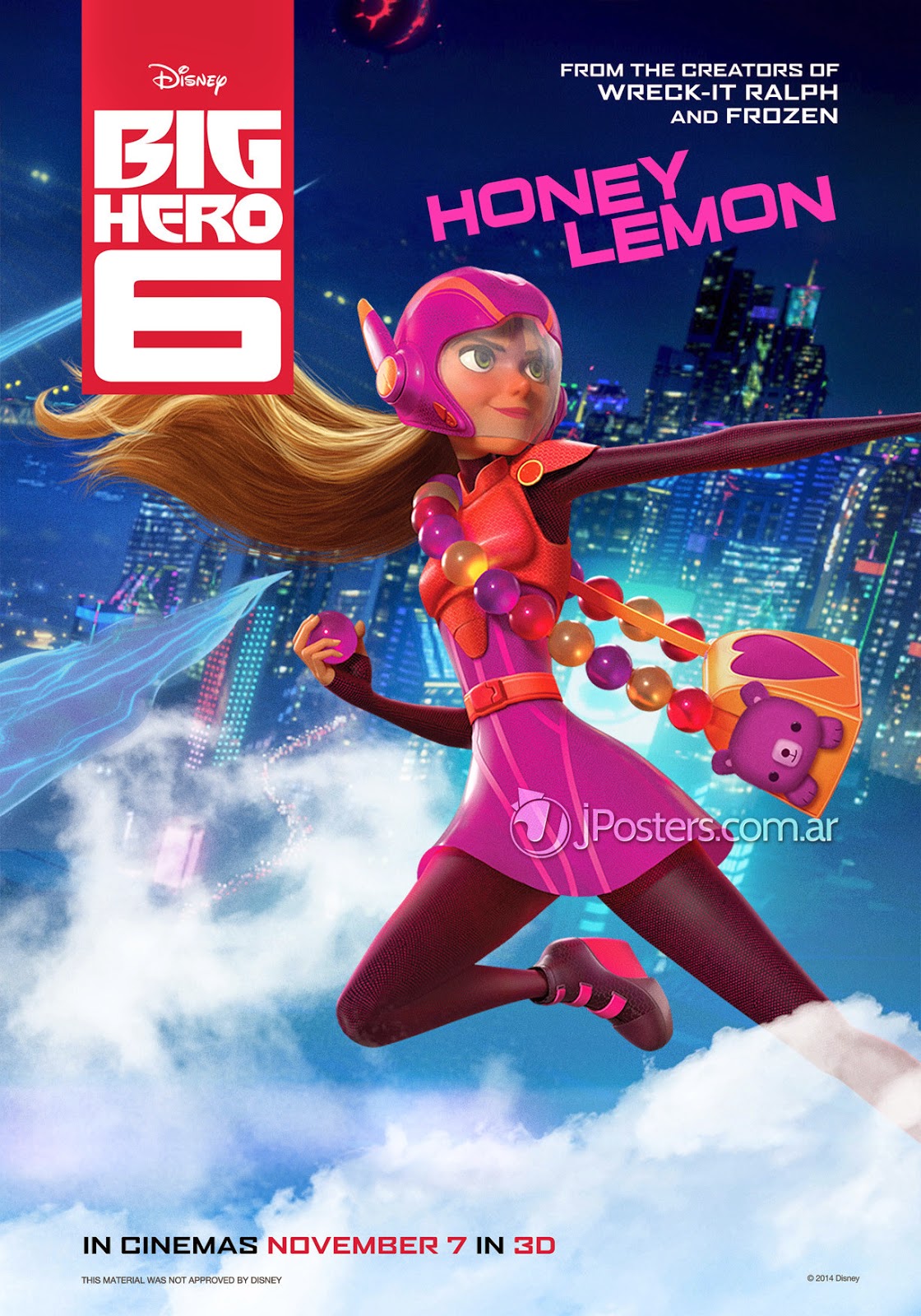 And, while Walt Disney Animation Studios has set movies in more modern times, they’ve never tackled a story about super heroes. And, before you say, let’s not forget The Incredibles, let’s remember that was produced by Pixar which has a different philosophy to storytelling.

Big Hero 6 tells the story of Hiro Hamada who tries to solve the mystery behind his brother Tadashi’s death. Through this journey, he meets an incredible team of like minded friends as well as Baymax, an artificial intelligence that is the last remnant of his brother. It is a story of loss and it is a story of learning about the people in your lives.

Thankfully, Walt Disney Animation Studios was able to create a film worthy of both the Disney and Marvel brands. I’ve been involved in several conversations about whether one would consider Big Hero 6 to be a Disney or Marvel film. We know that Disney has distanced itself from the source material in some ways with very little mention of Marvel in the movie. I understand that this was a way to allow Disney to have some leeway in storytelling that doesn’t bind itself so closely to the source material. But, I think, as I’ve said, Disney was able to strike a fantastic blend of the two brands. 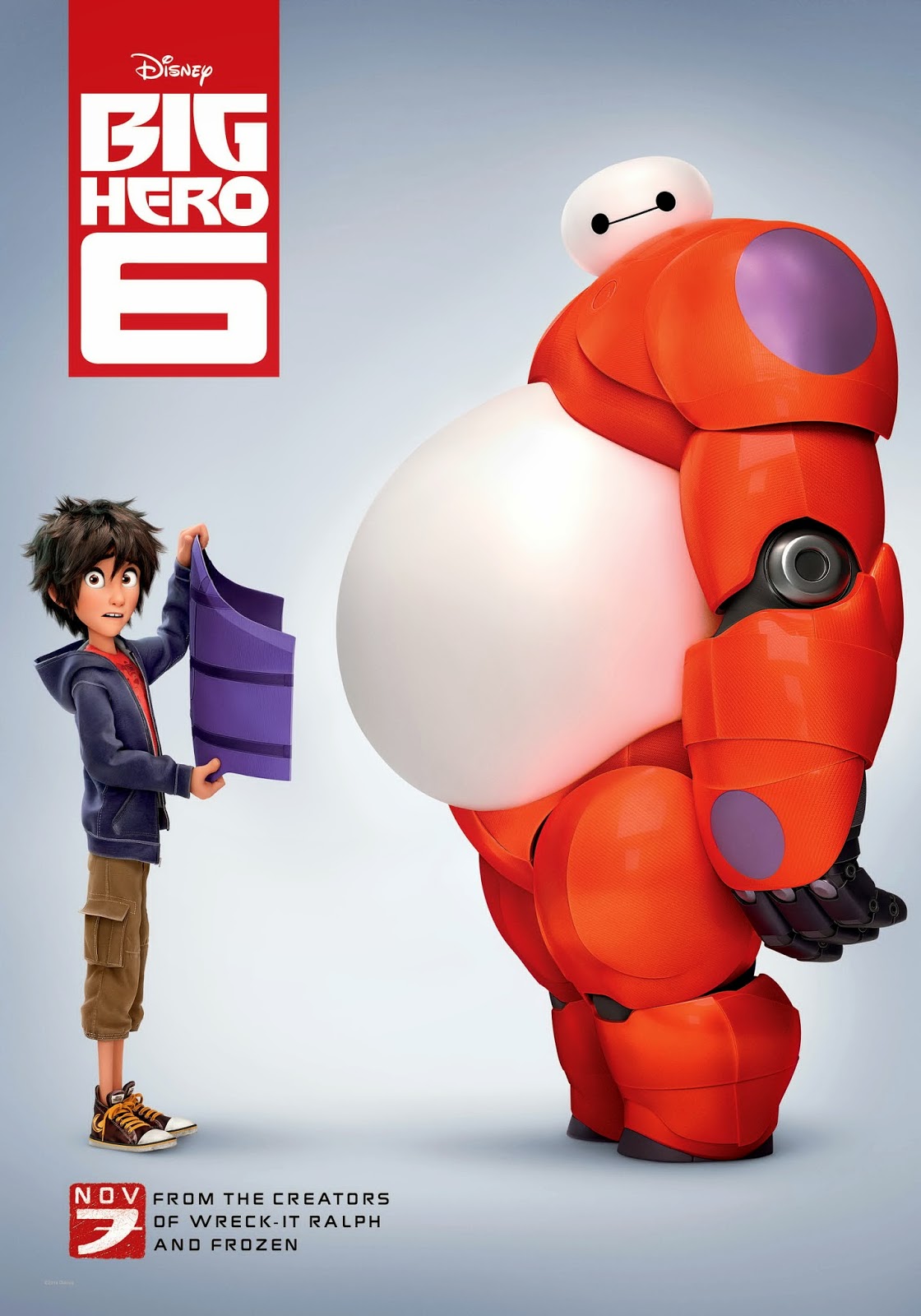 From the Marvel brand, it was able to bring some great action sequences and the creation of a ragtag group of individuals wanting to do good in the world. Yes, a super hero team.  I’ve read the “Big Hero 6” books and the film definitely captures the spirit. And from the Disney brand, it was able to bring in the heart. Disney always does an amazing job of finding the relationships that people can really relate to. For me, the film is all about the impact that people make in your own life, whether it mean the support Tadashi, Baymax or the rest of the team gave to Hiro, or, how we can’t take for granted the people who are in our lives. It is touching and heartbreaking, but, with the everlasting message of hope.

On Tuesday, February 24, Walt DIsney Home Entertainment released Big Hero 6 on Blu-Ray and DVD (although, it did release it in Digital HD and Disney Movie Anywhere earlier in the month). I chose to wait for the Blu-Ray release because it had an exclusive special feature called “Big Hero Secrets,” showing the various Easter Eggs in the movie. We learned about hidden references to Frozen, Wreck-It Ralph, Tangled and others as well as some very Hidden Mickeys. It’s a great special feature, but it is actually hard to find. In fact, I, at first, thought it was left off my Blu-Ray and look it up. If you want to spend the time figuring out how to activate it, skip the rest of this paragraph. Otherwise, here’s the secret….When you go to the Special Features menu, press “Up.” You will see Baymax appear in the upper right part of the menu. Press select and you got your special feature!

The longest and, to me, the most interesting special feature was entitled “The Origin Story of Big Hero 6: Hiro’s Journey.” Hosted by Jamie Chung, who provides to voice for Go Go Tomago, we learn how the film was brought from the pages of a Marvel comic and made its way to your local movie theater. It was interesting hearing some of the collaborative process between Disney and Marvel as well as showing Marvel’s confidence in Disney’s bringing this obscure property to the big screen. It was also really interesting to see how Baymax went from more of a monster looking robot in the comics to a soft personal healthcare companion.

“Big Animator 6: The Characters Behind The Characters” was a fine special feature. In this feature, we watch interviews about the artists involved in the film. There’s some nice interviews, but nothing earth shatteringly educational either.

The deleted scenes were also interesting to watch I always love to see early thought process behind a film and why certain scenes are cut. While the scenes were definitely entertaining and fun, but I’m also glad they went the direction they did. They’re definitely worth watching, though.

The piece d’ resistance of all the special features, though, is the accompanying theatrical short Feast, which, along with Big Hero 6, recently won an Academy Award! This short film follows a young Boston Terrier puppy named Winston and how he relates to the world around him by the food he’s given. My sister has a Boston Terrier puppy and it’s amazing how realistic Winston is! It is also worth noting that, if you have a Disney Movie Anywhere account, it includes the Disney Channel’s Mickey Mouse Short Tokyo Go which features Mickey Mouse braving the bullet train in Tokyo during rush hour. If you aren’t watching these Mickey Mouse shorts, you are missing on some fun animation!

Thanks Loren for a GREAT review!! - Al & Joyce

Posted by Storyteller Audio Productions at 9:24 PM No comments:

Alexander and the Terrible, Horrible, No Good, Very Bad Day 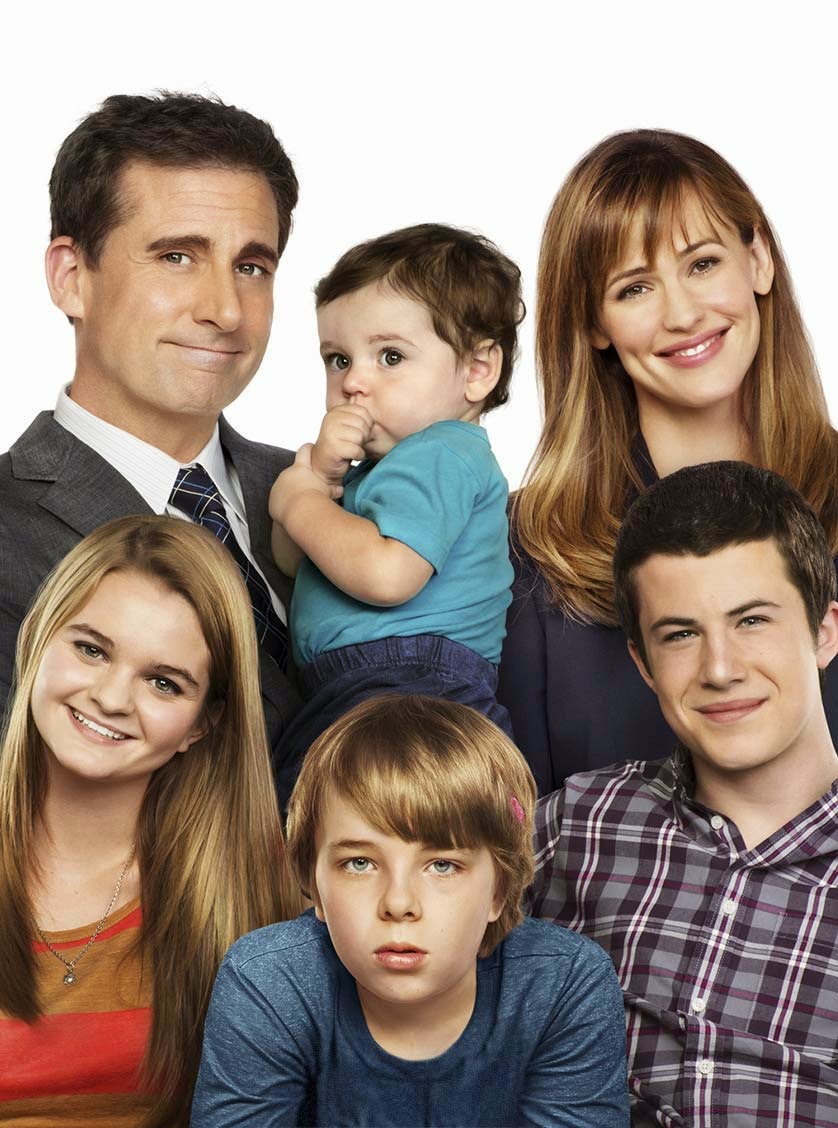 by Al Kessel
Once upon a time, there was a young boy named Alexander. All Alexander wanted was good day. You see, while his brother, sister, mother and father all enjoyed wonderful, successful and awesome days, young Alexander suffered from the curse of 'grumpy, bad days', well, most days. So, one day, on his birthday in fact, he made a secret wish...for his family to truly understand how he feels...how truly bad days and just make ya', Mr. Grumpy pants! And you know what? His special, magical wish was GRANTED! Only, a little too well, for you see, Alexander's family suffered the wrath of the TERRIBLE, HORRIBLE, NO GOOD, VERY BAD DAY!!

Alexander and the Terrible, Horrible, No Good, Very Bad Day is, without a doubt, one of the best live action Disney films we've seen in a long time. Back in October, 2014, we were honored to get an advanced screening of this fun family film (try saying THAT fast three times!), and when we were asked to write a review on the Blu-Ray/DVD release, we jumped at the chance!

Based on the best selling 1972 children's book by Judith Viorst (who actually wrote the book about her own son), the movie of course varies a bit in the plot, but the basic premise remains. The story follows the exploits of Alexander as he experiences THE most terrible, horrible day of his young life (you know, his rival at school is having HIS birthday party on the same day as our hero - only a much BIGGER party; his friend decides to photo-shop Alexander's head on a bikini clad super model; oh, and he almost burns down the science classroom at school, that sort of day), and begins to wonder if bad things only happen to HIM. Because, his entire family seem to be having GREAT luck! Then, in the very early moments of his birthday, he decides to treat himself to a celebration cupcake, and a wish. A very special wish that he makes while everyone else is sleeping - for his whole family to have a bad day, just like him. And the next morning he realizes that sometimes, wishes DO come true as he witnesses his dad, his mom, his big brother and sister, and even his baby brother, all have the most terrible, horrible....well, you get the picture!


With an all-star cast including Steve Carell (from T.V's The Office) as Ben Cooper, Jennifer Garner (from The Odd Life Of Timothy Green) as Kelly Cooper, Dylan Minnette (from Prisoners and T.V.s Lost) as Anthony Cooper, Kerris Dorsey (from Showtime's Ray Donovan) as Emily Cooper and Bella Thorne as Celia, Anthony's love interest, and of course, Australian actor Ed Oxenbould (from Paper Planes) as Alexander Cooper, this film has everything to make for an incredibly fun adventure! And if that's not enough, a lot of Australian Outback Party fun (including a crocodile, kangaroo and 'The Thunder From Down Under')! 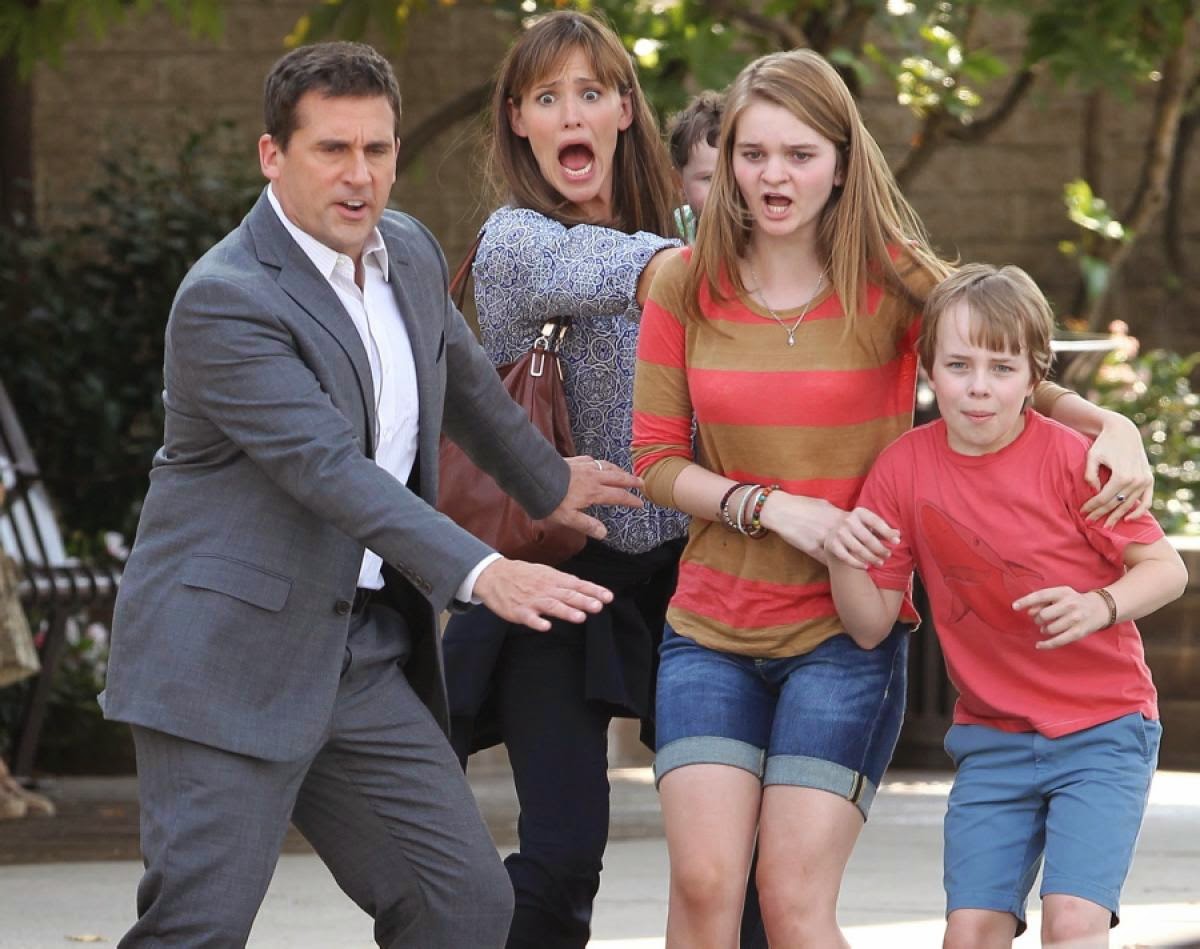 Alexander and the Terrible, Horrible, No Good, Very Bad Day is certainly a movie for the entire family. Disney's heartwarming comedy will have your entire family laughing out loud, repeatedly! 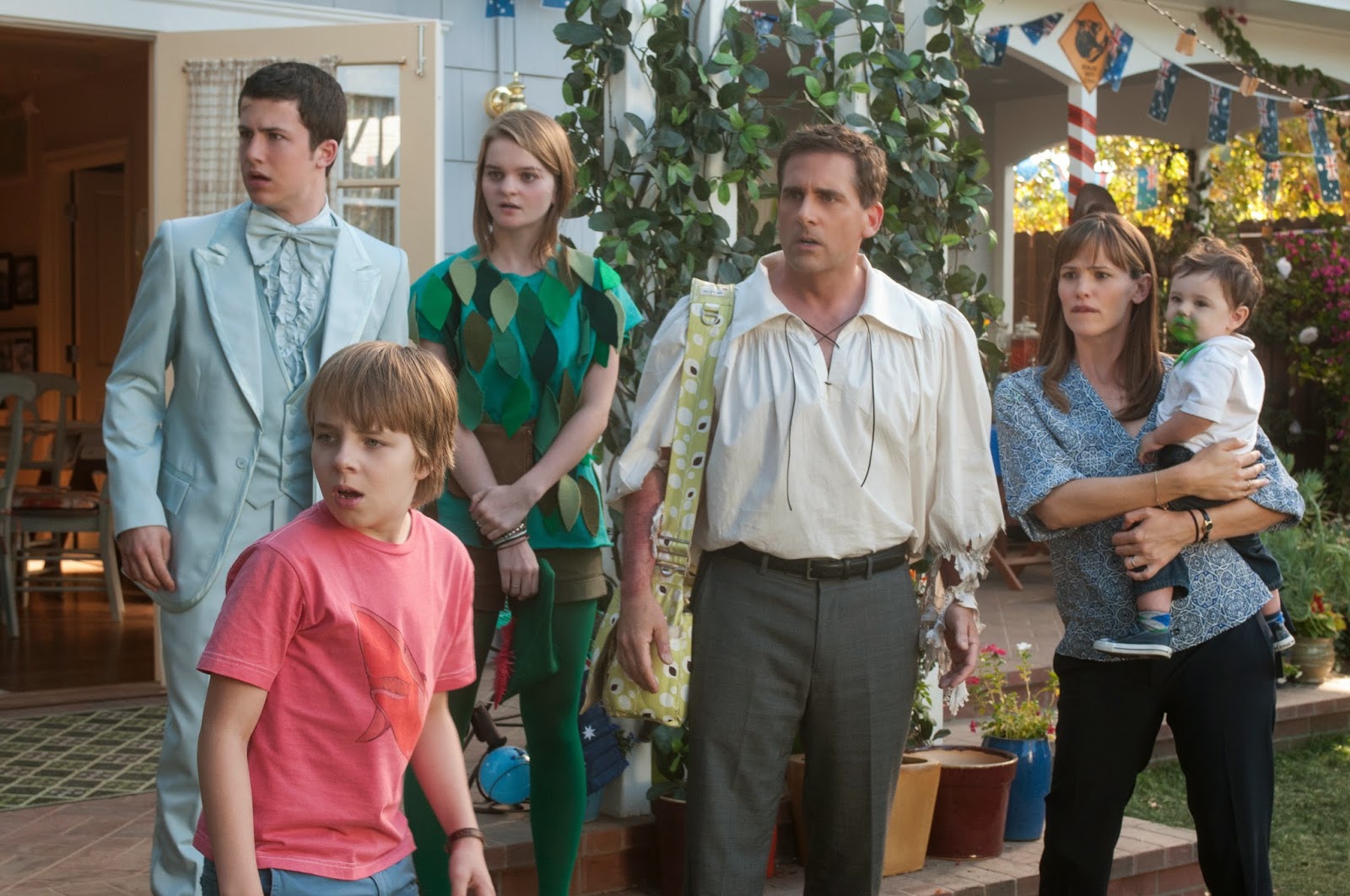 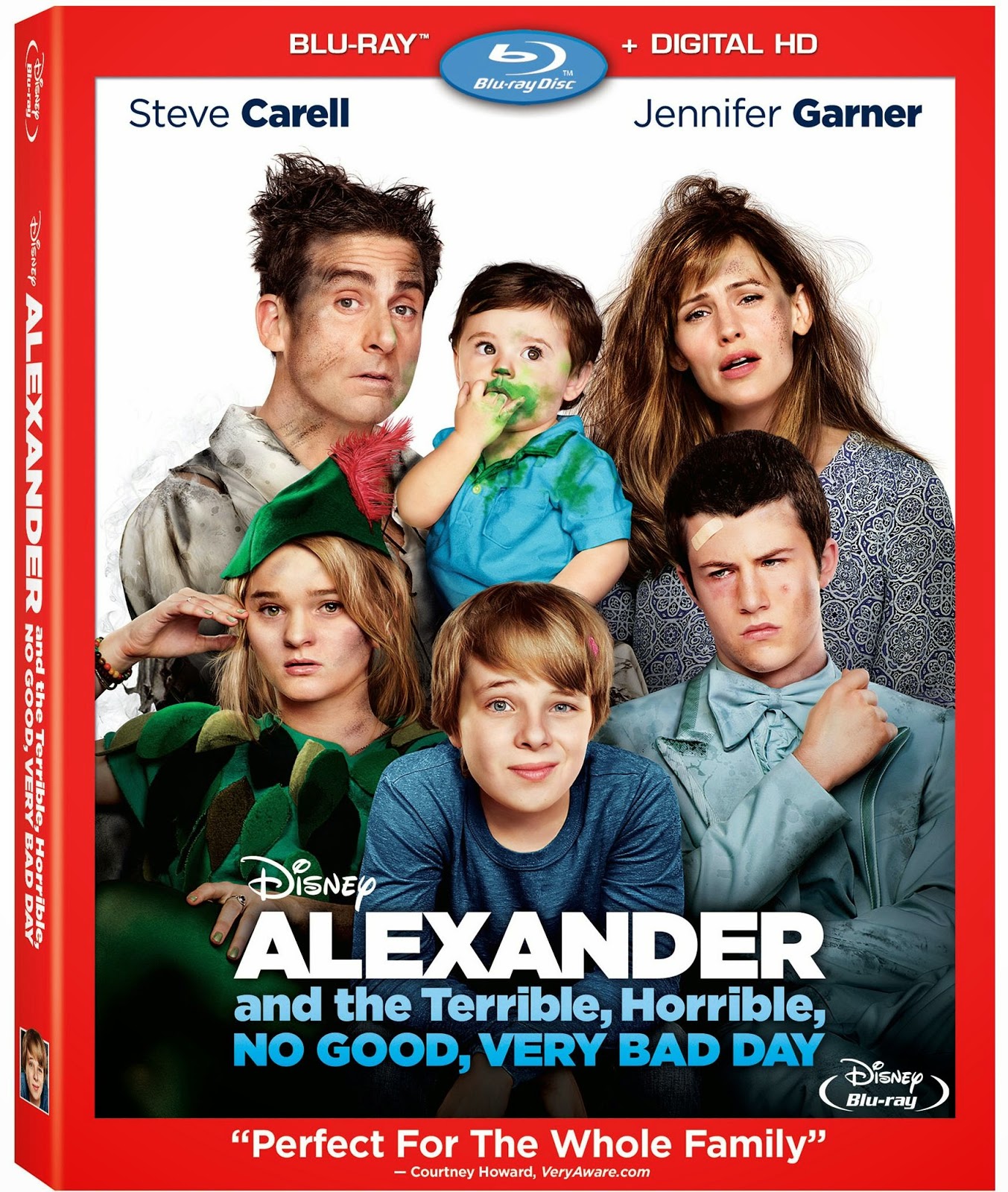 We HIGHLY recommend seeing Alexander and the Terrible, Horrible, No Good, Very Bad Day as soon as you can. In typical Disney fashion, this film really is a 'feel good movie' that you can share with everyone. On our scale of 1-5 Mickey's, we give Alexander a 5! Yep, it's THAT good. Really. It is.


Posted by Storyteller Audio Productions at 3:58 PM No comments: